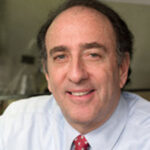 Jay A. Levy, MD, is professor in the Department of Medicine and research associate in the Cancer Research Institute at UCSF. He is director of the Laboratory for Tumor and AIDS Virus Research at UCSF. In his early work, Dr. Levy discovered xenotropic viruses that introduced a new paradigm in virology. During the past 30 years, Dr. Levy and his staff have dedicated their efforts to research on AIDS. In 1983 he independently discovered the AIDS virus, HIV, which he originally called the AIDS-associated retrovirus (ARV). He pioneered heat-treatment studies that demonstrated how to heat-inactivate HIV in clotting factor preparations. Dr. Levy is a fellow of the American Academy of Arts and Sciences, American Association for the Advancement of Science, and the American Academy of Microbiology. He was given the Award of Distinction by the American Foundation for AIDS Research (AmFAR).